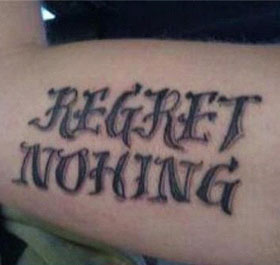 Tattooing has been practiced for centuries, and along the way has created some pretty entertaining stories and body art. For how much of the population has a tattoo not too many people are knowledgeable about them. Here are some fun tidbits of tattoo facts that you can whip out next time your friend asks you to go with him to get his butterfly tattoo on his ankle touched up.