Stars Who Have Removed Tattoos 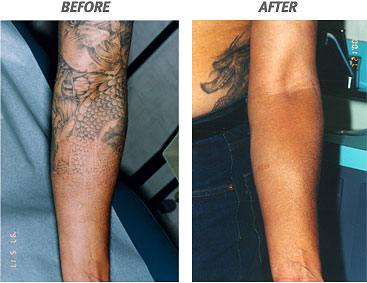 Megan Fox– The brunette bombshell has elected to remove a large forearm tattoo of legend Marilyn Monroe, stating that Marilyn is a negative icon and she no longer wishes to attract that kind of negative attention in her life. Rumor has it that she is planning to remove two other un-identified tattoos.

50 Cent- The rapper had decided to remove most of his tattoos in order to pursue acting. Covering up tattoos is a notoriously long and arduous process that Fifty has commented he is tired of.

Kelly Osborne- It’s no surprise that Kelly is choosing to remove her tattoos, considering her motivation for getting them. She got them as a young teen be anger her parents and has said her ink “was a way of self harming because I knew it would upset me mum and dad.”

Mark Anthony– When the singer split from singer Jennifer Lopez, he promptly got his “Jennifer!” tattoo on his wrist removed

Who knew a pretty face wasn’t enough in the fashion industry — especially when you’re Niki Taylor! But that’s the case for

the supermodel who has quite a few tattoos on her 5’11” body, so she’s in the very painful process of removing four of them, including a fairly large cover-up piece on her right arm, which she says is the one that is often the “deal breaker” to potential clients. “I am removing it because it is stopping me from getting some work I think,” Taylor tells omg! of the ink on her right forearm, which is a hodgepodge of cover-ups over the years. As reported on OMG by Yahoo.

She got the original, “Amor Vincit Omnia,” Latin for “Love conquers all,” in 2002 to match one belonging to her then-boyfriend Keith Urban, who has since covered his as well. “People’s eyes go right to it. It doesn’t matter how acceptable tattoos are or how many people have them, [attention] goes right to this one on my arm so I’ve decided to remove it, although I still do have tattoos in other places.”

In addition to the Polynesian-inspired band on her arm, Taylor, 37, is also lasering off a tattoo on her left wrist and two on her back. The pain of the process, she says, exceeds that of childbirth — and she delivered twins! “I’d rather give birth than have my tattoo removed, that’s how painful it is,” says the mom of four. (In addition to Jake and Hunter, 17, from her first marriage, Taylor also has Ciel, 3, and Rex, 8 months, with hubby Burney Lamar.) “It’s quick, but going through it is so … it’s like a burning, snapping shock through your whole body and you’re just like [screams] ‘Is it over yet? Why did I ever put this tattoo on my arm?'”